Shelton Clean Sweep is the entire week of Earth Day, April 22.  This year the dates are April 20-28, which includes two full weekends. Here are some of the first cleanups:

Posted by Teresa at 9:58 AM No comments: 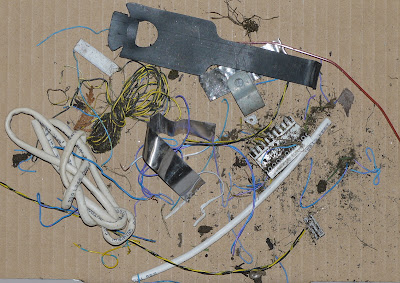 [The following post is by Teresa]:  Everything in the photo above was picked up beneath an AT&T  U-Verse "cabinet" one day in April in my neighborhood. This is one of those big green metal control panels. I've walked past the box every day for years and there is always something there on the ground. In addition to what you see in the picture, there are hundreds of little snippets of wire in the dirt too small and numerous to pick up. This is a clear violation of Shelton's Litter ordinance. I've personally had to pick up litter in this spot over and over again. Common guys, pick up after yourself please!

There was also a mess left behind after Hurricane Sandy and the Blizzard wherever the wires had been down on Mill Street and Judson Street -- lots of pieces of plastic and metal. It's understandable that some litter may be left behind by emergency crews in a rush to bring back the power. But it doesn't seem fair for neighborhood volunteers to be stuck picking up debris from the utility companies months after power has been restored.

Update 4/ 19/2013:  Ingrid Waters, a member of the Anti-Litter Committee noted that she also frequently needs to clean up materials left by utility companies. She took the picture below just this week showing items near #88 Long Hill Cross Road: 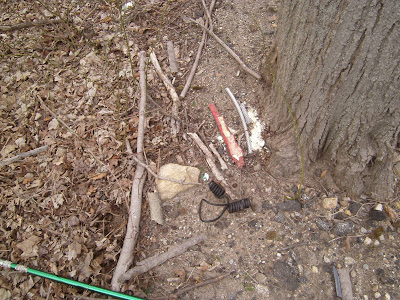 Posted by Teresa at 8:40 AM No comments:

Gearing Up for Clean Sweep 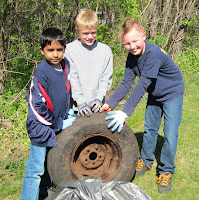 Shelton's 6th annual "Clean Sweep" commences on Saturday, April 20, as civic groups, homeowners, and businesses head outdoors to pick up litter in their neighborhoods.  The event lasts the full week of Earth Day (April 22) and ends on Sunday, April 28.

Participants choose the where and when.  Some work alone and others organize group events. Cleanup locations included public areas such as streets, parks, school grounds, and waterways. After the cleanup, the City will pick up the accumulated litter if called.

Adults working alone typically pick up litter along the streets in their neighborhood, while Scouting groups focus on parks and school grounds so that children are not exposed to traffic. Businesses have tackled some of Shelton's more difficult stretches of roadway, including portions of Isinglass and Booth Hill Roads. Businesses now also have the option of adopting a street for year round cleanup in exchange for a street sign with their name on it.

Some of the reasons Sheltonites have given for why they pick up litter have included:


Registration is not required, but is encouraged. The Anti-Litter Committee has also set up a simple online form where people can record a cleanup year-round.  Online registration and cleanup reports can be found at DontTrashShelton.org, along with answers to frequently asked questions.

Clean Sweep has proved to be quite successful during its first five years, with an estimated 500 people participating throughout Shelton each year, not including the related Housatonic River Cleanup. This year the River Cleanup, which is organized by a group of boaters, will be held on Saturday, April 27, from 8:00 am to 4:00 pm at the Sunnyside Boat Launch.

Clean Sweep participants are eligible for free custom patches and certificates from the Mayor, which are awarded at a special recognition event held in June, complete with refreshments and door prizes. This year the event will be held on June 12, at 7:00 p.m. in the City Hall auditorium. The event is especially popular with Scouting groups.

Although Clean Sweep officially kicks off on April 20 this year,  cleanups prior to that date can qualify as Clean Sweep projects if the cleanup is registered online. Bags and gloves are now available at the Community Center (main office) and City Hall (Mayor's office). To request a pickup from Highways & Bridges, call 203-924-9277 during business hours.